Digit Dog was watching the 10th Bug Squadron marching past but he was a little late and some of the bugs had already marched under the leaf. He is wondering how many are under the leaf.

How many bugs are in the 10th Squadron altogether?

How many groups of 2 can they make?

How can you work it out?

You might want to use Numicon to help you think about the problem.

More bug fun inspired by A Remainder of One

The 12th Bug Squadron is ready to parade. Digit Dog has put them in twos.

Calculating Cat’s ladybirds look different. She wants to quickly count how many ladybirds she has. How could she do it?

What number sentences could she say and write?

What is the same and what is different about the two groups of ladybirds?

Could they be arranged in any other way?

What if you put them in lines of 5? What do you notice?

Another activity inspired by A Remainder of One

The members of the 16th Bug Squadron have organised themselves for the Queen’s parade.

Is Calculating Cat correct? Or has she made a mistake?

What do you notice about the bugs?

What can you say about:

Could the 16th Squadron organise themselves in a different way?

Remember each row has to have the same number of bugs in it because “the queen likes things tidy”.

Can you estimate how many ladybirds are in the jar?

Calculating Cat is using her reasoning skills to estimate how many ladybirds there are. What do you think? Do you agree with her?

How many ladybirds has Digit Dog taken out of the jar?

What is your estimate now? Do you think there are more or fewer ladybirds in the jar than out of it?

Great book for investigating division and remainders and arrays and multiplication and number patterns and …………..

The 25th bug squadron (it has 25 bugs) needs to organise itself into lines to march in the bug parade.

“The 25th squadron marched past the bug crowd,

bound and determined to make their queen proud.

The troop had divided by two for the show.

Each bug had a partner – except soldier Joe”.

Poor Joe is left out and gets into trouble because the queen “likes things tidy”.

Find out what happens when the squadron divides into threes and fours. Guess who is left out each time. However, there is a happy ending when the bugs decide to march in fives:

“Five lines of soldiers with five in each row……

What about other classes? Would they march in the same way as you?

Use different resources to act out the story and investigate other numbers. 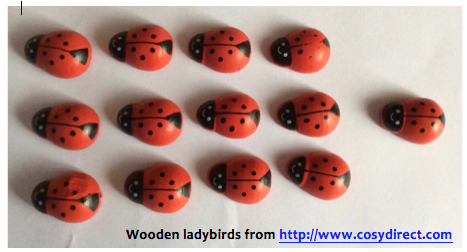